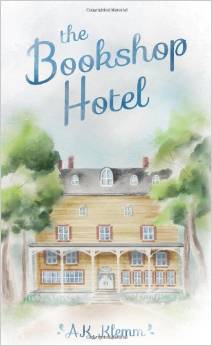 "The Bookshop Hotel took a deep breath...
For so long, the building had longed for heavy hearts to grow light and for weary souls to find laughter."

After returning to her hometown of Lily Hollow, AJ Rhys sets to fulfilling her childhood dream of restoring the old hotel on Aspen Court. With nothing but the legacy of her great grandfather and the help of two dedicated strangers, AJ begins transforming the once grand hotel into her ideal bookshop and refuge. Only after the renovations are in full swing does it become apparent that the hotel is having an effect on the town and everyone in it. The memory of a past that still haunts both AJ and Lily Hollow finally begins to release its grip as the Bookshop Hotel becomes a tie that binds its patrons together. A story of family, tragedy, forgiveness and the power of books, The Bookshop Hotel is an intriguing introduction to the residents of a small town where the past is never far away and secrets remain just below the surface.

Look Inside
Disclosure of Material Connection: Some of the links in the page above are "affiliate links." This means if you click on the link and purchase the item, I will receive an affiliate commission. I am disclosing this in accordance with the Federal Trade Commission's 16 CFR, Part 255: "Guides Concerning the Use of Endorsements and Testimonials in Advertising."
Toggle Sliding Bar Area