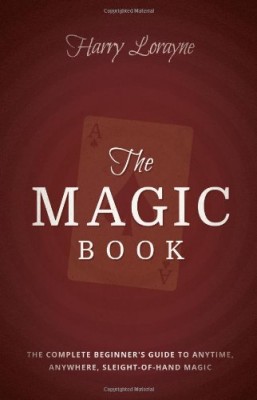 Nothing worthwhile comes easily. To do the "real stuff," you have to learn some manipulation, some sleight of hand. This requires time and practice. Learn all about magic and good practice habits with The Magic Book.

I’ve written many books on the subject of magic, but this is the first one I’ve written for the general public. The other books were designed “for the trade” – for professionals in magic and for advanced amateurs. They are technical and are sold only through dealers who cater to magicians.

I rarely did any magic during the television appearances I made to explain my memory systems, because I was afraid to. I felt that if the public saw me do magic, its attitude might be, “Oh, it’s all a trick!”

I was probably right, up to a point. But I don’t think it matters anymore. People know that the memory systems are not “tricks” but proved workable methods and techniques. I finally mentioned, in a recent memory book, that I started as a card manipulator, and the sky didn’t tumble down around me. That’s why I decided, at last, to do a magic book for a general audience.

Look Inside
Disclosure of Material Connection: Some of the links in the page above are "affiliate links." This means if you click on the link and purchase the item, I will receive an affiliate commission. I am disclosing this in accordance with the Federal Trade Commission's 16 CFR, Part 255: "Guides Concerning the Use of Endorsements and Testimonials in Advertising."
Toggle Sliding Bar Area