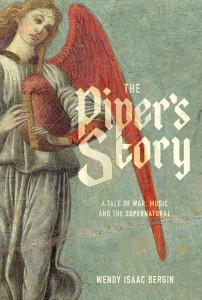 The power of light and the power of darkness are not, nor ever were, equal.

What might a clairvoyant see in wartime? In May of 1940, Scottish piper Ian MacGregor’s visions lead to a devastating encounter with a supernatural being. Blinded and left for dead by his unit, he is mysteriously guided to safety by the music of an otherworldly piper. More than a half century later, in the Pacific Northwest, in a grand old house resonating with discordant echoes, his grandson Neal must also confront a supernatural being in a life and death battle. As Neal searches for the key to defeat this most formidable foe, he learns how the history of the past, rising up like the skirling of the pipes, is inextricably linked to the present.

This is a story that might be read over a weekend, but the next week would be spent pondering the implications; more than a novel of character driven action, this tale raises some interesting speculations regarding the relationship between creative and destructive energies.

In my memory I hear the bagpipes, feel the foreboding fog surrounding everything and remember the deep emotions elicited by intense relationships. The compelling juxtaposition between the very current and real events, and the mysterious, surreal happenings, will keep you wishing you could read faster!

Moving, engrossing and as spirited and stirring as the pipes themselves.

Currently Available at Amazon.com and the following stores:

Murder by the Book

Good Books in the Woods